History of Alpaca in Golf

This document is for education only and is not to be reproduced, whole or in part, without express written consent of the author. Barry Salber, Contributing Writer, GOLF MAGAZINE penned it best....

Biographers call it his Ring-A-Ding-Ding Era -- the early 1960s: The cold war was hot, martinis were cool, and Frank Sinatra and the Rat Pack were in full glory. It was the era of big-fin Cadillac convertibles, of custom-made persimmon woods and of alpaca cardigans.

Those were the days!

When you think of Frank Sinatra, Perry Como and Bing Crosby, playing golf do you remember alpaca? How about golf legends, Jack Nicklaus, Dan Sanders, or wait, you know this one; Arnold Palmer! When you watch him walk down the fairway, are you thinking he's missing the signature golf sweaters he used to tout back in the day?

If visions of these illustrious gentleman don't readily come to mind when you contemplate golf fashions, it doesn't mean you have been living under a rock; you are simply too young to remember the good ol' days, and the love affair golfers had with alpaca.

Ah the alpaca golf sweater. Commonly referred to as just "alpaca", or the floppy cardigan, Do you remember the cardigans with the baggy sleeves? No pockets, loose fitting? Yep, those! They were the height of luxury and the mark of excellence in the golf apparel world! AND they were oh so popular in the 60's and 70's (hard to believe that was, well, so long ago... sometimes seems like yesterday!) Also called the "links knit", these sweaters were known by everyone and made even more famous by Arnold himself, with his signature line.

Alpaca came to fame earlier on however; 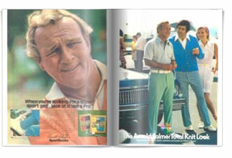 "In the Depression year of 1931, on the golf links at Krewe Island off Savannah's windswept shore, two legends of the game, Bobby Jones and Walter Hagen meet for a mesmerizing thirty-six-hole showdown." (1)

In the movie, The Legend of Bagger Vance, and book respectively, it places alpaca on the scene...

The headlights of a dozen cars cast an eerie light across the green at Krewe Island resort, it's 1931. From maybe 35 feet above the hole, Bobby Jones sets Calamity Jane behind a Spalding Dot. The blonde and impossibly handsome hero wears plus fours and an alpaca sweater over his creamy white shirt.

Is this truth or wishful thinking of the game? We may never know, however a far better description of Walter Hagan put alpaca on his frame in the late 1930's

A jazz age clone of Rudolph Valentino---hand- some features bronzed by the sun, black hair pomaded to iridescence—Hagen revolutionized wearing apparel on the golf course. In an era when most golf pros dressed in sack suits and brogues, he wore silk shirts, florid cravats, alpaca sweaters, screaming argyles, black and white shoes custom made at $100 a pair. (2)

Alpaca conjures up smoky memories of a simpler life a happier time and an unequalled game.

By the 1950's Alpaca was gaining a more popular stance with the mainstream and it didn't go un noticed...

THE MERCHANT PRO ~ Sports Illustrated by EbscoHost - 1954 Today the golf pro would rather clean up on clothes than clubs... He knows a good thing when he sees the newly popular alpaca cardigans at $40 outselling traditional golf essentials...

Mentioned with a distant look in his eye, Mr. Keonnecker, said of The Canyon Club "Frank, Hope, Dinah, Jack Benny, Dean -- they were all members there." It was also the top grossing pro shop in the world for high-end merchandise. Known for putting together matching colors -- alpacas, cashmeres, Johnston and Murphy shoes, Sinatra's yearly bill ran as much as $30,000 just for soft goods. "Frank would say, "Let's go to the storeroom," and he'd buy 25 sweaters for gifts," recalls Keonnecker, pro at the time. "He'd pick out the sizes and the colors -- his favorite was orange -- and when I sent them out, they were not to be returned, except for size. He picked out the colors for everybody." (3)

Rent the original Rat Pack "Ocean's Eleven" it showcases the retro gender attitudes and retro fashion: Frank Sinatra's famed orange alpaca sweater, which if you like the Clooney and friends version, you may find it to be the liveliest thing about the movie, but you will see an original man with a passion.

Many a celeb has worn the alpaca beauty, the Golf-and-cocktails crowd all the way.

They all wore them. Mike Douglas recounts a story about Bing Crosby...

I was as nervous as a tenement kid at a debutante ball.... He sang, told stories, treated us like we were next-door neighbors over for a little visit. I'll tell you how unassuming Bing Crosby was. Bing was a sweater guy, remember. Between the golf and his casual, comfortable attitude, he had gone through a herd of alpacas in his time. He wore a sweater for the show. A few minutes before we started taping, I looked over and noticed this one had a gaping hole in the elbow. I leaned close and whispered, "Bing that sweater has a hole in it." How laid-back was Bing? He looked at me and shrugged. "They'll get over it." (Douglas, I'll Be Right Back, Simon and Shuster, 2000, pages 62-63)

Even Perry Como did his share to by wearing alpaca golf cardigans on his national television show and adding to its luster and desirability.

Used as a top shelf euphemism, alpaca reined supreme, even comedians knew of its position...

"George, you look perfect ... that beautiful knitted shirt, an alpaca sweater, those expensive slacks ... You've got an alligator bag, the finest matched irons, and the best woods money can buy. It's a damned shame you have to spoil it all by playing golf !"

We are proud to carry these much loved alpaca golf cardigans, v-necks and offer new to the mix vests and other pure alpaca treasures, for Pro's and Joes, heck even amateurs! Everyone can share in this memory.

In fashion homage to the combined works of Arnold Palmer & Robert Bruce, we have created Alpaca and Silk blends with retro details and modern styling. These new classics are in stock, with more styles on the way.

We also have brought fashionable alpaca to the ladies golf arena. Now women can not only enjoy the alpaca of stories, but wear and shape their own memorable stories for generations to come.

About this time Dan Sanders became known, not only as a golfer, among other things, but as a "snappy" dresser of the sport. On April 18, 1966 at Augusta National Golf Club, dressed like a human tangerine from spikes to sweater, Sanders delighted the gallery (and thus himself) by removing one tangerine shoe, rolling up one tangerine pant leg and nearly toppling himself and his tangerine alpaca into the red-brown water before blasting a fine recovery close enough to two-putt for his bogey 4. This feat didn't deter 26 year old Jack Nicklaus' from winning his third Masters title, which was also his second in a row, but it did help to make him work for it. (4)

Nicklaus knew alpaca as a benchmark too. In his book, Greatest Game of All: My Life in Golf by Jack Nicklaus, Herbert Warren Wind - 1969 - Page 117

At the concluding ceremonies, after the USGA had thanked the Seattle Golf Club for hosting ... but no touring pro worth his alpaca sweater is going to have...

They also used to feature on 'Happy Days' on a regular basis a bit later in the 70's.

My grandfather used to wear the yellow, pink, or Kelly green ones with loud plaid pants on the golf course. Man golf used to be neat.

Then synthetics came on the strong, wash and wear and the floppy cardigan and the much loved sweaters slowly faded from view.

Today they are mentioned with reverence and often appear in fond memory posts and photos of days gone by.

Things I Miss In Golf (http://thebestingolf.blogspot.com/2008/03/things-i-miss-in-golf.html) "There's another old favorite of golf I'd like to mention - In the 60's golfers wore soft, loose weave Alpaca cardigan sweaters. Think Arnie."

"I was recently in a 'New York Italian' restaurant and there above our table was a picture from the 60's I would think, with two men sporting immaculate floppy cardigans (both with bottom button undone - of course!). These cardigans were very popular with top US golfers of the day. Doug Sanders was always a style setter with perhaps a matching pale peach floppy cardigan and socks.

Well in the spirit of what goes around, comes around, and what was old is new again... we are pleased to bring back the spirit of an old, much loved freind, but one which is brand spanken new, for all to enjoy! May they wrap you in fond memories and bring new moments of delight to those who haven't loved them before. Wear them in good health and may your greens be lush and your skies fair.

Sources not mentioned in the article
×